Franklin Advances to Semi-Finals, Ranks 20th in the Nation, 4th in Class AAA

FRANKLIN, TENN.—The Franklin Band took its 2021 show “Lucy!” to the Bands of America (BOA) Grand National Championships at Lucas Oil Stadium on Nov. 12 and 13, competing in a field of 98 high school marching bands from across the country.  Franklin’s performances ranked them 20th in the nation and 4th in their Class (AAA).

“Lucy!” pays tribute to the beloved I Love Lucy show and comedian Lucille Ball and features musical selections including the theme from I Love Lucy, “Tico Tico” (as made famous by Desi Arnaz), “Red Cape Tango,” and “Bizarro.”  Featuring the color guard dressed as Lucy and band members dressed as Ricky Ricardo in white tuxedo jackets, the show is a fast-paced romp that includes tango dancing, a tuba solo by “Lucy,” and the color guard reenacting the iconic candy factory scene with their guard rifles.

Following Franklin’s performance, the crowd erupted into a spontaneous standing ovation.  Comments on the event’s 24LiveBlog included, “Never does a second go by in this show where the music doesn’t PERFECTLY fit what’s happening on the stage” and “Do you love Lucy?  ‘Cause I love Lucy and this entire show is like a lost episode . . . As the band comes to the end of the show, a huge pink flag with a giant heart on it comes over as they reprise the I Love Lucy theme.  The crowd loves it!  Standing ovations all around! Incredible performance tonight, Franklin!”

Bands of America groups bands into four classes, based on the number of students in 10th-12th grade at each school.  Franklin is a Class AAA band.  At each competition, class awards are based on scores earned by performances during prelims.  Bands advance to semi-finals and then finals based on overall score, regardless of class distinctions. Franklin’s semi-finals performance score ranked them 4th in Class AAA.

The Franklin Band is under the direction of Jacob Campos and Briana Vogt, assisted by Mike Leitzke, Levi Brandenburg, Michael Horvath, and Brad Klemmensen. 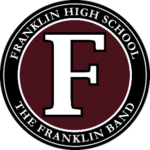