The Franklin Band wants to thank everyone who supported and participated in this year’s Sonic Boom, a marching band competition in partnership with The Home Depot!  Franklin hosted 14 bands, all of whom performed in spite of an extended rain delay. 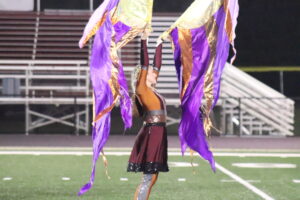 While each band was adjudicated and received scores and critique from the distinguished panel of judges, placement trophies were not awarded.  “All the directors met and decided that, because each band performed under different circumstances, with different amounts of warmup time due to the rain, it wouldn’t be fair to announce placements in each class, or a Grand Champion,” said Jacob Campos, Franklin’s Band Director.  “Each of these bands gave an outstanding performance they should be proud of.” 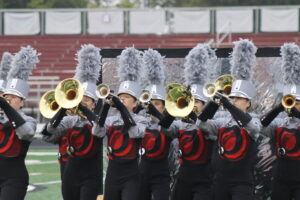 The rain presented opportunities for each band to demonstrate resilience, resourcefulness, and respect for other musicians.  For example, when Ravenwood took the field and was about to begin their performance, pesky rain showers kept delaying their start. When the drizzle began, everyone on the sidelines worked quickly to cover the front ensemble instruments with tarps.  The rain stopped and the tarps were removed, only to bring the rain again, starting the whole cycle over. 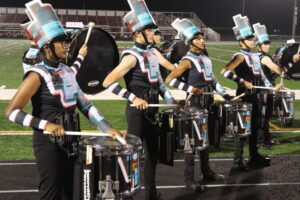 The Franklin Band is also grateful and proud to announce that during Sonic Boom! over $2,100 was collected for flood relief efforts of the Waverly High School and Junior High School band programs!  Franklin Band members passed collection buckets through the stands throughout the event.  Funds will help the Waverly Band program meet financial needs for items including instruments, equipment, chairs, stands, and much more.